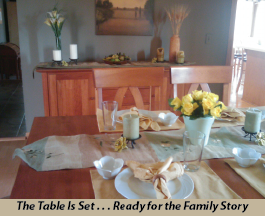 “I can’t wait until I go to college so I don’t have to sit through Sunday Night Dinner,” our 18-year-old daughter whined — creating tension and drama — as we gathered for our ritual meal around the dining room table, set with linens and lit with candles. Six months later on her first weekend home from college, she said, “Josh can pick me up at 7:00 tonight, so if we eat early, I can be home for Sunday Night Dinner.” My husband and I exchanged a silent victory glance. We’d placed a high value on family dinners with weeknight routines being a simple time together, sharing stories and events of the day. When our three kids ranged in age from three to eight, we introduced Sunday Night Dinners, taking extra effort to prepare a special meal and create an aesthetically pleasing atmosphere. While we’d held fast to the tradition, we often felt that it was an uphill battle. In that one casual sentence, our spirited child validated our dedication to family meals, especially Sunday Night Dinner.

This family episode came into focus for my husband and I as we listened to an NPR story about Bruce Feiler’s New York Times article, “The Stories That Bind Us,” and his new book, The Secrets of Happy Families. Feiler shares his own family meal experience when the dinner-time dynamics exploded into an episode that temporarily splintered his family into separate spaces in his parent’s home.

“If there’s one thing that parents have heard, it’s that the family dinner is important for children. There is a lot of research to back that up,” Feiler asserts, “But here’s the problem: it just simply doesn’t work in a lot of our lives.” A third of Americans do not eat family dinners regularly, and America ranks 33 out of 35 countries in terms of eating meals together. So Feiler launched into trying to uncover the clues to how families function best and how the family dinner fits into the equation.

After a while, a surprising theme emerged. He discovered that “the single most important thing you can do for your family” might be the simplest of all: develop a strong family narrative. He cites research that children tend to do better when they know their family history, for example:

Citing work from Marshall Duke and Robyn Fivush at Emory University, Feiler summarizes that every family has a unifying narrative that tends to take one of three shapes.

Duke and Fivush learned that children with the most self-confidence have a strong “intergenerational self,” knowing that they belong to something bigger than themselves. According to Feiler, this family narrative may or may not happen over the dinner table — it can be shared at any time of the day to reap the same benefits.

Feiler concludes, “If you want a happier family, create, refine, and retell the story of your family’s positive moments and your ability to bounce back from the difficult ones. That act alone may increase the odds that your family will thrive for many generations to come.”

While Feiler argues that family dinners are too complicated for most families today, I argue that they provide an opportunity to create the family narrative that he discovered is so important to family happiness and children’s success. For my family, despite the chaos and controversy that putting on these meals can entail, every dinner is a “bead in the string” that unifies and creates our own family narrative.