Bricks, Walls, Cathedrals: A Story-bite to Lead with Vision 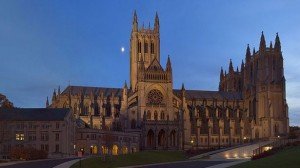 The first time I heard this story from a senior executive at General Mills, who was addressing a team as they embarked on a two-day innovation retreat, I was transfixed. He told the story in his own words, relating it to his European travels and his awe when he toured the grand European cathedrals. Emotion came through in his tone of voice, facial expressions, and colloquial language. I thought that he’d created the story, and I was inspired to think big and bold just to live up to his challenge. After all, if the medieval times—without the technology and engineering equipment we have today—could produce such grand-scale and lasting monuments, our potential is limitless!

Since then, I’ve heard this story told several times, and later read about it in Annette Simmons’ book, The Story Factor. Annette characterizes is as a classic “vision story” due to its power to paint a compelling vision and challenge people to think beyond the tactical “brick laying” parts of their work.

Today, I led an ideation session and during our preparations suggested that my client open the meeting with this story. She set aside the typical strategy and data slides and instead inspired the group by telling this story and translating it to the business goals at hand. The team grabbed onto the analogy and, throughout the day, we heard “bricks,” “walls,” “chapels,” and “cathedral” tossed around as they created ideas and insights to build a bold, new future for their organization.

I’ve witnessed the power of story to unify a team around a common goal and imagine a future with courage and confidence. So I encourage you to use stories when you need to galvanize a team around a change objective. It’s OK to “steal with pride” the stories others have told to communicate your goals. As long as you’re transparent about where you learned it, you can make these stories yours!