Change is Not a Light Switch: The Grief in New Year’s Resolutions 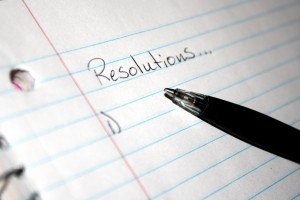 Bernie joined the Cardiac Rehab program where I interned in grad school. He was angry and resistant to the lifestyle changes we promoted. I remember him standing in the back of my nutrition class, making jokes and snide remarks under his breath – he was distracting and made me feel uncomfortable. He sent his wife to represent him at his nutrition counseling session with me because “she did all the cooking.”

But, eventually, Bernie got into better shape from walking around the track, and he felt better than he had in years. One day, he realized that his heart attack had given him a new lease on life. He apologized to me, brought me a small gift, and asked if I would do his nutrition counseling again – this time just for him.

Bernie became a model cardiac rehab patient, walking the track with dedication and a smile on his face.  He reached out to new patients and helped them on their journeys of lifestyle change – one lap at a time. Bernie’s transformation taught me that the changes we dread might be the best things that ever happen to us.

The Grieving Part of Change

Bernie’s story offers valuable insights as we reflect on the changes 2013 brought and wonder about the ones we might encounter in 2014. While many of us attempt to craft our future through annual New Year’s Resolutions, the reality is that the majority of these resolutions are abandoned by Valentine’s Day. Why? Because we think that change is as simple as turning on a light switch; we underestimate the accompanying shifts to our emotional landscape that accompany diet, exercise, and personal habit changes.

William Bridges, in his book Transitions, looks to ancient cultures and tribal societies for wisdom about navigating life changes. He asserts that whether the change is positive or negative, chosen or imposed, we must travel through three phases of emotional transition to arrive on the other side. Phase 1 involves the ending of the old ways – it is a grief journey, entailing denial, anger, resistance, and negotiation. Phase 2, the middle zone, is fraught with ambiguity and confusion because our old habits don’t work any more, but new ones have not been established yet. Phase 3, the new beginning or metaphorical rebirth, is what we expect the minute we set a New Year’s Resolution. But without experiencing the pain of Phases 1 and 2, we can’t get to the new beginning.

Bernie entered the Cardiac Rehab program in grief. He acted out his anger and struggled with the reality of what heart disease meant to his life. During his first few months, he had a foot in his old life and a foot in his new. It was not comfortable or coherent place to be. But when he got to the other side, his apology and gift helped to deliver him to his new beginning.  For 30 years, I’ve carried the gift of Bernie’s transition – not the trinket – but the symbolism of his growth.

The changes that shape our lives might come from New Year’s (or other) resolutions. More often, they are presented to us unexpectedly. How these changes shape our future lies in how we dance through the transition process.

Help your patients, clients, consumers, and family members–even your selves–be more successful with 2014 resolutions by learning from Bernie. Go beyond the light switch and explore the shifts in the emotional landscape that are inherent in change.