What My Ford Galaxy Taught Me about Mentoring 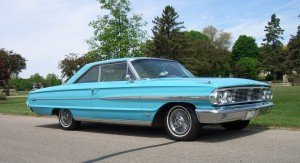 As a freshman in college, I had to live with my parents, which was not what I wanted to be doing. Feeling stifled and cut off from my peers, I imagined that buying a car would give me (some of) the freedom I craved. When I broached the topic with my parents, they shut me down immediately. I heard a litany of reasons why a car didn’t make sense for me. Top of the list: I could ride to the university with my dad who was a professor there.

Crestfallen, I moped around for a while. Then, my teenage defiance kicked in, and I started to look at used cars. My parents’ resistance subsided as they watched me tackle the obstacles on my own. Somewhere during this process, our next-door neighbor, Bill, started to help me filter the ads and get my arms around this major purchase. An engineer and super-nice guy with no kids of his own, he provided subtle guidance that buoyed my efforts.

Eventually I found a car I could afford – a ’64 Ford Galaxy 500. When Bill assured me that it was mechanically sound, my freedom seemed in reach. The problem was that the previous owner had stripped its paint, but not finished the job. Talking to Bill, I learned that without new paint the car would rust in one Wisconsin winter. But it was a very expensive repair that put the car out of my price range.

Then Bill offered a solution: he could help me paint it. Let’s be clear: I was a sissy. Car mechanics were not my thing. Somehow, he coached me into doing the unimaginable. We worked together for 2-3 weeks that fall, sanding, priming, and painting my car. He had the tools, equipment, and skills to manage the technical aspects of the job.

But more importantly, he had the patience and wisdom to make me the leader in the rehabilitation of my car. I discovered that I could operate a power sander and pressurized spray painter to transform this ugly, dull grey car into a shiny, turquoise symbol of my freedom. I earned my independence – and my parents’ respect – under Bill’s tutelage that fall. Plus, I learned valuable lessons about persevering beyond obstacles to achieve my dreams.

At dinner with a group of colleagues a few weeks ago, “first car” stories floated into the conversation. Everyone had a story to tell … and they told these stories with such passion and energy that I began to ponder the significance of a “first car” in our culture. I realized that these shiny, expensive objects represent independence, freedom, and responsibility – and in hindsight, they evoke memories of youthful antics, innocence, and growing up. No wonder so many people love to talk about their first cars.

My first car story means all those things to me. But because of Bill, I also take away important lessons about mentoring:

What is your “first car” story? What life lessons have you derived from it and how can you mentor others from what you learned?