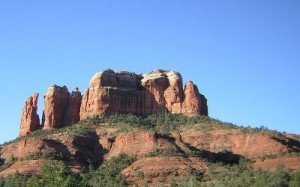 “Mom, are you coming?” Jackson called from the next plateau. I was sitting on a rock ledge trying to overcome the vertigo triggered by my fear of heights. Next to me sat a woman who’d confessed that she did not have the fitness to proceed. Observing her contented defeat, I knew I didn’t want to give up. I was fit enough to persevere, but it was terrifying to climb what appeared to be a vertical incline with only tree branches and rock outcroppings for my hands and feet to grasp. I pushed aside the flood of horrifying images, took some deep breaths, and started climbing. Jackson eagerly awaited me, and I was rewarded with an awesome view of Cathedral Rock, just south of Sedona, Arizona.

Before I caught my breath, Jackson had sprinted away and was scaling the next incline like a Billy goat. I drank in the view and hesitantly approached the next vertical – Jackson was already halfway up. I managed better on this one … and the next two. Eventually, we arrived at an amazing saddle ridge with the Cathedral Rocks rising to the right and left. It was spectacular, but as I looked down the sheer drop-offs on either side my vertigo started to return. Ja 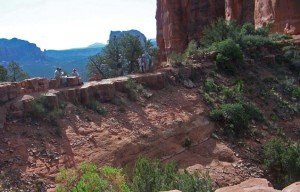 ckson trotted back and forth along the ridge with excitement, while my mind raced with fears of falling … not only me – but, horror of horrors – my son!

I was ready to head down when a man, breathless with excitement as he declined from an even higher precipice, encouraged me to take Jackson up to the next level. “Was he crazy … planting this idea in a 13-year-old boy?” I wondered. I tried logic and reasoning … but could not dissuade Jackson. Against my better judgment, I agreed to forge upward.

As we scaled this last incline, two women were descending and raving about the spectacular view at the top. Jackson was almost at the summit, while I fought spinning, paralyzing sensations as I sought my next grip and step. I confessed to the women, “I want to be up there with my son, but I’m struggling with my fear of heights.” One of them chuckled, “Well, you’re in the wrong place!”

The other one came over and coached me, “Look up and focus on your next grip. Don’t look down. It’s worth it when you reach the top.” Her words propelled me upward and also helped me navigate my descent. The view from that summit is emblazoned in my memory forever. We got back to the Cathedral Rock Saddle, which had been the end-of-my-limits only 40 minutes earlier. Jackson teased, “Mom, you are such a coward.” As my tension melted into a smile, I replied, “No, I was actually really brave today. I had to overcome a deep-rooted fear to do what we did. I’m glad we climbed up there, but it wasn’t easy.”

As we drove back to our hotel, Jackson and I talked about bravery and what it means to run away from fear versus confront it. I explained that a phobia makes no sense, but it’s very real to the person experiencing it. Fearless of the potential dangers, he was bold and adventurous and – so it seemed – courageous. My phobia singed horrific possibilities of epic proportions into my psyche, so proceeding took every ounce of courage I could muster.

Reflecting on this experience, I’ve extracted some insights that can help us overcome everyday fears and anxieties. At one extreme, fearless disregard of danger is risky, while caving-in to fear is self-limiting. Courage lies in between.

The memories of that climb still evoke deep terror and scintillating excitement. I will always cherish the experience of hiking to this high point with my son, as well as the lessons I learned about overcoming my fear of heights.