What I Learned from the Accidental Thief 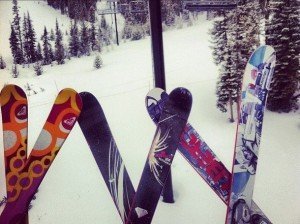 After herding my three rambunctious and exhausted kids out of the ski chalet, I discovered that my skis were missing. In a panic, I alerted my husband, and we searched high and low … to no avail. As I went inside to report the (probable) theft, he did some sleuthing and noticed that close to where I’d stored my skis was another pair of skis of the same brand, model, and size as mine. Suspicious of an accidental ski swap, he tried fitting my ski boots into the bindings and when they snapped into place, he was determined to solve the “mystery.” He stood on alert watching for women skiers about my size and eventually spotted a ski instructor skiing downhill on (what looked like) my skis. As she shepherded her class back to the lesson area, he approached her and asked, “Are you sure that those are your skis?” Turns out that in the commotion of getting her class geared up, she had mistakenly taken my skis instead of hers.

Fast forward eight years … I had trained for the Kortelopet, a big cross-country ski race in northern Wisconsin and made plans to stay at my relatives’ cabin with a friend and her good friend, Kathy, who was also planning to race. Sparked by the anticipation of a shared adventure and nurtured with the warmth of chili, fire, and a mutual friend, I kindled a new friendship with Kathy. On race morning we left at dawn, drove to the remote parking area, and boarded a shuttle bus. As we settled onto the bus, I noticed that Kathy had put name labels on her skis and commented that it was a good idea. She perked up and told me that she has made this a practice because several years earlier, she’d accidentally taken someone else’s skis and described the humiliating experience. As she shared the details of her story … teaching ski lessons to kids … the husband confronting her at the bottom of the ski run … the couple was about to call the police … her students looking at her in shock, I realized that she was telling me the other side of my story. After we pieced it all together and realized that we’d had a chance encounter over (stolen) skis, we laughed and bonded even further. We get a good chuckle every time we tell our shared story!

The “Accidental Thief” story reminds me that the impressions we make in chance encounters may follow us into the future. Different settings and different roles might shed new light on a situation or shift the dynamics of a relationship. Three lessons I take from my encounter with the Accidental Thief might be useful in keeping relationships intact for future opportunities.

Story sharing builds bridges and empathy. During controversy, actively seek the other person’s story and let your imagination wander into their experience. Chances are, you might think differently about your position.

Have you had a chance encounter with someone who reappears in your life later? How did the first and subsequent encounters unfold? Perhaps you have a story worth sharing?