Learning from a Millennial Entrepreneur 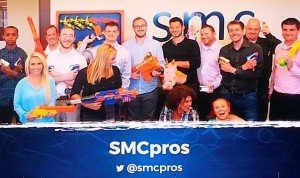 Tyler Olson crawled out of a lofted bed in his dorm room at 10:00 on a Saturday morning and greeted his staff, who were already busy working at the three desks jammed under his bed. They were servicing computers for his burgeoning technical support company, HelpMeTy.com. This was the moment when he realized it was time to rent office space.

Tyler’s entrepreneurial spirit started when he was 12 years old, sitting around the campfire at his grandparents’ cabin. Their neighbor—an elderly woman—asked if anyone could help fix her computer. Tyler eagerly knocked on her door the next day and solved her problem. Surprised when she asked what she owed him, he replied, “Well, I really like brownies.” Tyler got more from this experience than a batch of yummy brownies. It inspired him to market his tech skills to friends and neighbors. He and his dad dropped fliers in mailboxes, and soon he was fixing computers while his friends were mowing lawns.

In high school, Tyler worked at Circuit City, where he learned more about computer technology, sales, and working with people. Circuit City did not have a Geek Squad, so they let Tyler refer customers to HelpMeTy.com.

Eventually, Tyler enrolled in the Entrepreneurship Program at the University of St. Thomas to learn business fundamentals for start-ups, such as managing cash flow and marketing without a budget. He also met his first mentor, a professor who encouraged him to write a business plan for HelpMeTy.com and enter it into student competitions. After winning state and national contests, Tyler competed in the Global Student Entrepreneur Award. This mentor also connected him to the Entrepreneurs’ Organization (EO), a professional society of entrepreneurs from around the world, which Tyler still identifies as “his tribe.”

Despite his trepidation about taking on overhead, Tyler’s decision to move the business operations out of his dorm room proved to be a timely maneuver. The improved infrastructure enabled the growth to employ eight technicians. A few years after college, he sold HelpMeTy.com and started to explore his next venture.

With support from a new mentor he found through EO, Tyler formed a partnership and secured angel investor funds to deliver online Facebook classes for small businesses. The first sessions only drew a few participants … the team became anxious … loan payments loomed … there wasn’t enough income to pay themselves. When one participant requested, “Why don’t you just do social media for me,” they decided to pivot and focused on becoming a social media agency. That was the genesis of SMCpros, which seven years later is one of the largest and most respected social media firms in Minnesota and was recently recognized by the Minneapolis/St. Paul Business Journal as one of the 2016 Best Places to Work.

Tyler’s story captivates me for a number of reasons. First, it’s a fun tale about the real-life twists and turns of creating a business. I’m also intrigued with how the Millennial generation is changing the way work gets done and applaud their independent spirit. But, more importantly, entrepreneurs and business leaders from any generation can learn some valuable lessons from Tyler:

Pursue Your Passion—Tyler has been fascinated with technology since a young age. As someone who learns how gadgets work by taking them apart, his dad indulged him—with the stipulation that he had to fix what he’d “broken” by morning. Tyler’s passion for technology catalyzed his first venture and has underpinned his entrepreneurial life.

Mentors Make a Difference—An entrepreneur himself, Tyler’s dad encouraged and enabled his early efforts to get HelpMeTy.com started. His college professor urged him to translate his “can-do” business skills into a sound business plan, which won him accolades but also taught him the value of discipline and planning. His EO mentor helped him navigate the more complex worlds of raising capital and collaborating with business partners.

Learn the Fundamentals—Despite his early successes, Tyler remained open to learning. At Circuit City, he embraced the role of a sales associate, which taught him a deeper understanding of technology and what consumers seek in technology. Not a glamorous role, but his passion and hard work were rewarded with referrals. Eager to continue learning, Tyler acquired critical business skills through his college classes and mentoring relationships. Curiosity and lifelong learning fuel entrepreneurs’ dreams and ambitions.

Fun and Flexibility Create Loyal Employees—When I arrived at the SMCpros office suite at 5:00 pm, Tyler was the only one there. He explained, “We are on summer hours so most of the staff left at 3:30. I don’t care when they work, just so they get the job done.” Glancing around the open office space, I noticed that Tyler sits amongst his staff. A foosball table and rack of toy guns hinted that that they mix work and play. His employees secretly wrote a complicated and lengthy application for the “2016 Best Places to Work” award—sounds like a vibrant and healthy culture!

Pivot at the Right Time—Tyler started scrappy and kept his overhead low. But he also knew when it was time to invest in the infrastructure of an office. Similarly, he pursued the opportunity his client requested to provide social media services, rather than keep teaching businesses how to do social media. Often entrepreneurs must stay the course during the early days of a start-up, but they should also recognize signals that indicate a need or opportunity to pivot.

Tyler sensed a sweet opportunity when he helped his grandparents’ neighbor fix her computer. Looking back, he never dreamt that brownies would launch his entrepreneurial career.