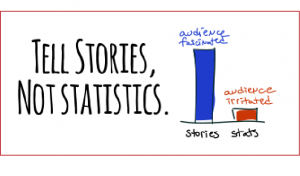 Tech check was done … 15 min countdown ticking. Equipped with a clicker and a wireless mic, Chris Quam stood on the stage of a cavernous ballroom in the Las Vegas Convention Center. His heart sunk with dread that people might not come. Nervous, but not scared, his confidence soared as the audience started to fill the hundreds of seats in the room.

In moments, he would be presenting consumer research to an audience of convenience store owners and executives from around the country. It was a big deal—the National Association of Convenience Stores Annual Show attracted over 20,000 attendees. But Chris knew his stuff. He’d written the deck. He’d conceived the framework and done the research. He was poised to tell a story about how convenience stores could better meet the needs of female shoppers. He was confident that this material would enlighten his audience and provide useful information they could apply to grow their businesses. 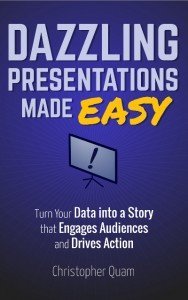 His instincts were right. The audience nodded, made eye contact, applauded, and asked questions. It was an exhilarating moment in his career as a market researcher at General Mills.

He presented a few other times at the show, and his research was picked up by the trade press. After the dust settled and he rotated to a new assignment, he decided to capture this “career best” experience by writing it down.

He began by writing a blog and drawing info-graphics about his approach to distilling complex information into understandable and actionable frameworks. He published the book, Dazzling Presentations Made Easy, for himself and to help others who face the challenge of sharing technical information with non-technical audiences.

My 2016 New Year’s Resolution was to start writing a book. The concept had been tumbling around in my head for a couple of years, but I hadn’t taken any concrete steps to make it happen. A year later, I have made substantial progress against this goal and plan to publish the book in 2017. So when my colleague, Chris Quam, released his book last spring, I was excited to read it and talk to him about his journey as an author.

Also, Shawn Callahan, a global leader in business storytelling, published a blog post about writing his book, Putting Stories to Work, in conjunction with its release on World Storytelling Day on March 20, 2016. I also interviewed several authors who integrate their book(s) into a consulting, speaking, and coaching practice.

All of these authors’ stories are inspiring my own book-writing journey through the lessons they share:

Blog Posts Provide Fodder for a Book—Many authors had been blogging before they wrote their books. Shawn started blogging in 2004, so his first task was to read through all his old posts and flag those that he thought would fit into his book. Chris started blogging with the end-goal of writing a book, so his blogs fit into the overall construct for his book. My approach is somewhere in between. I’ve been blogging since 2013 and knew that I could harvest some of that content for my book. However, I did not read through my blog posts until I had defined my overarching framework because I was concerned that I might get attached to certain posts/stories and force-fit them into my book.

Writing Requires Willpower and Discipline—Chris characterized his writing experience as “way harder than you think.” He described feelings of isolation, sitting down to write after his son went to bed and he’d handled all the daily fire drills in his corporate day job. He said that it took “sheer willpower” to give up family time to keep writing some nights. Shawn disciplined himself to get up every day at 5:00 am and write 550 words a day, five days a week, for 48 weeks. Other authors shared similar experiences. Like Chris, I’m more of a night-writer. I have an organizational framework for the book and have mapped out milestones with target dates, but I follow my energy. If I’m having a burst of creative energy, I write into the wee hours of the night. Other evenings, I just revise and refine what I’ve drafted. I don’t force myself to write every night … I find that setting the book aside allows the content to incubate. And, I want this project to feel like fun because passion, along with discipline, fuels my writing.

Embrace the Gift of Critical Feedback—Every author applauded the editors and reviewers who provided critical feedback that strengthened their books. Shawn worked with a book coach—a close friend and book editor—who met with him every few weeks. These regular meetings with his coach motivated him to keep producing copy for review and discussion. They also spent a lot of time at the front end working on the book structure. Chris produced his first draft, and then sought input from several friends. They surprised him by pointing out flaws in organization, flow, logic, and grammar. He was humbled, but will be forever grateful that they “called his baby ugly.“ I’m seeking input from a few trusted colleagues throughout my writing and planning on a deep review process once I have a solid first draft. It will be OK with me if they say my baby is ugly because it will show they are invested in my success.

Write a Shorter Book—The last question I asked the authors I interviewed was: What would you do differently if you knew then what you know now? Almost every author shared that they wished they’d written a shorter book. This insight triggered me to completely revamp my original outline (which was everything that I knew about storytelling) and break it up into a few more-focused concepts. My next task was to pick the lead idea and blow it out further.

With these lessons, I have started to write. In January 2018, I hope to share the rest of my book-writing story. If all goes as planned, I will be celebrating the accomplishment of two New Year’s Resolutions: 2016 to start writing and 2017 to finish writing my book! Wishing you success and inspiration in your dreams for 2017 and beyond.