Passport to Rainbows and Waterfalls 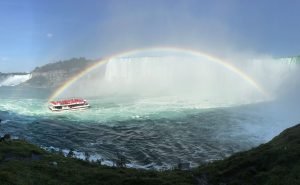 As he eyed three passports and a Minnesota Driver’s License, a Canadian Customs Officer asked me (the driver) why a Brit, an Australian, and two U.S. citizens (from Georgia and Minnesota) were traveling together across the border at Niagara Falls? I replied that we were attending a conference at the University of Buffalo and wanted to visit the falls. He drilled into several layers of detail … we answered with our most respectful and compliant voices: “The Creative Problem Solving Institute (CPSI).” “I’ll be returning to London on Sunday.” “I’m leaving for Sydney on Tuesday.”

Then he turned his focus to me, probing suspiciously into details about my identity, which I gathered he had pulled from a database. Our visit to Canada was a spontaneous plan, so I did not have my passport and was aware that I may not be allowed to enter Canada. I had figured “nothing ventured; nothing gained.” But my bravado vanished as I tried to stay calm under his penetrating gaze. Abruptly, he told me I could proceed but to never try to enter Canada again without a valid passport.

Phew! Michael, Nick, Laura, and I were relieved, but shaken. We felt like naughty children who just came out of the principal’s office. But a bright blue sky beckoned, and we proceeded to the falls. It was a breath-taking view from the minute we parked the car in a lot above the falls. A stroll along the falls and an elevator ride down several floors took us to a viewing platform, where we witnessed the spectacle of a full rainbow at Niagara Falls. Truly amazing! 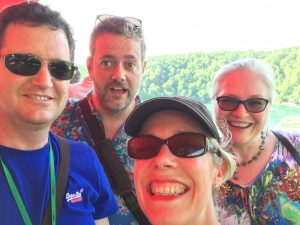 After a leisurely visit at the falls and companionable drive back to Buffalo via the Canadian route, we were looking forward to dinner at a restaurant on the Erie Canal. Our euphoric mood was zapped upon reaching the U.S. Customs. At first it was a similar drill to the Canadian border crossing. The agent was bewildered (and a bit suspicious) about why such a diverse group was traveling together. But then she lit into me—read me the riot act for going into Canada without proof of U.S. citizenship. After a lengthy tirade, she pulled up my record and grilled me with questions about my identity, then she retreated to her computer while we sat frozen in suspense. She returned with one last lecture and allowed me to proceed, warning that this episode “will be in your record.” Yikes!

Although I may have pushed a boundary into recklessness, I don’t regret the afternoon I spent in Canada with my new friends from London, Sydney, and Atlanta. This time it worked to ask for forgiveness; however, I will never do it again. And next time I go to Buffalo (or anywhere near a border), I’ll take my passport.

My adventure to Niagara Falls was one of several peak experiences at CPSI 2017. Another was co-facilitating a new 6.5-hour workshop that I developed with Mimi Sherlock, “Innovate with Stories.” We developed a model and tools to weave story techniques into creative problem solving and innovation processes. After months of work to develop the workshop, we were excited to experience it in action. Participants got hands-on practice with a wide range of story tools for creative collaboration.

Visioning—Stories help a team imagine a future different from today’s reality. We used 5-Card Leader Stories and Guided Imagery to help participants conjure a story about a “career best” experience. Then we used a Snowball Pair and Share technique to ladder-up to a common vision for how an organization might create a culture that fosters career bests for everyone.

Clarify—Facts offer the what, stories get at the “so what.” The hardest and most-often skipped or skimmed-over step—clarifying the right problem to solve—requires fact-finding and making sense of the facts. Participants explored the power of empathy stories to understand consumer needs and practiced story listening skills to become better at curating stories during the clarify stage.

Develop—Stories bring promising ideas to life for testing and refinement. Participants created a product prototype and three replicas in 13 minutes. Then they stepped back and crafted a story to pitch their prototype. Great acting and storytelling!

Implement—A great idea can die a fast death within a corporate culture unless key stakeholders get excited and help to advance it. We explored how stories can help to communicate, influence, and persuade others to support new products, processes, and disruptive ideas.

Facilitating with Story—A compelling story can help to bring stakeholders on board. Mimi and I both incorporate interactive, story-based exercises into our facilitation. Story props and exercises help create an environment that promotes communication, risk taking, collaboration, enthusiasm, alignment, and productivity.