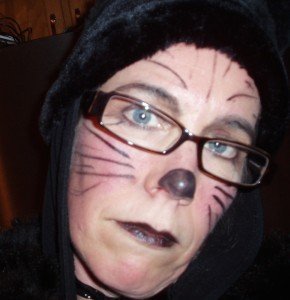 Halloween Night of 2008, my 11-year-old son, Jackson, was the last of my kids to have friends over before trick-or-treating. His older sisters had moved on from the “childish” fantasies at our house to boy-girl parties and teenage antics.

Jackson thought he and his friends should trick-or-treat alone, but his friends’ moms were not on board with that approach. I sided with them, but didn’t want to totally squash their fun by escorting them around. Also, wanting to fulfill my own Halloween spirit, I decided to dress up like a cat and ride a scooter around the neighborhood to keep up with their parade.

It was a cold night, so I donned black leggings, a faux fur hat, and a possum fur vest from the 80s that I found in the back of my closet. With ears and a tail, I was ready to rock and roll. The scooter allowed me to give them space, but easily catch up if necessary. I stopped and chatted with other groups of trick-or-treaters, then zoomed up on Jackson’s crowd periodically to make sure they were OK.

I thought it was an elegant plan, but Jackson was horrified! He told me in no uncertain terms that I had ruined his Halloween. And for a while, it seemed like he had ruined mine. But when I crawled into bed, I found a note from Jackson on my pillow, “I’m sorry I got a little rude tonight … I really had a spectacular Halloween, and I hope you did too. I just wanted to say ‘Happy Halloween, sorry, and I love you.’ P.S. The scooter was actually a really good idea. I was just thinking too much.”

This Halloween, I visited Jackson where he goes to college and we reflected on this episode. With my kids grown, I have no regrets about my zany behavior nine years ago. Jackson has gotten over it too, as he kidded me: “Mom, you have to admit it was a little unusual. But it was creative.”

Adolescents have a knack for making others feel out of place. Inhibitions that stem from their own self-doubt get projected to their friends, siblings, and parents. While we outgrow the excruciating pain of adolescent insecurity, most of us take some inhibitions into adulthood and—whether we intend to or not—project them onto others.

Consciously or subconsciously, these inhibitions can stifle innovation, which—by definition—involves doing things differently. Do you ever find yourself hindered by these common pitfalls to creative thinking?

Have you ever limited yourself because of someone else’s inhibitions? How did that make you feel and what was the outcome? Have you ever defied someone’s negative vibe and followed your heart? What came from that choice? Take the Halloween spirit with you throughout the year and dare to be different.