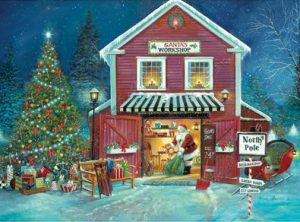 With sub-zero temperatures predicted for the holiday weekend, we decided to order a jigsaw puzzle and chose a picture of Santa’s Workshopthat was supposed to glow in the dark.

On Christmas Eve day, we set up the 1,000-piece puzzle on a portable table in the center of our gathering space. An hour into the project, it started to feel overwhelming. I was trying to find all the border pieces and sort them by color. My daughter, Eleanor, was grouping similar colored and textured pieces onto cookie sheets. Chaos spread onto other horizontal surfaces … the project sprawled.

We had some cranky moments after discovering that the puzzle had some unusual features: it was cut into curvy patterns rather than horizontal and vertical grid lines, and many interior pieces had flat edges that fooled us into thinking they were border pieces. We chased a number of dead-end solutions. Eleanor left in frustration. I persisted a little longer but also became fatigued and pulled out for a while.

When I returned, Eleanor was back at it and had assimilated our individual efforts into something that was starting to look like a picture. With a fresh perspective, pieces that I’d struggled with all day fell into place. We rejoiced that we had turned the corner!

Nighttime had settled, so my husband advocated that we turn off the lights to see if it really did glow in the dark. Wow! It was amazing—even 40% done, the effect was mesmerizing.

At that point, other family members got engaged, participating on and off throughout the evening. Grandparents joined on Christmas Day and cheered us on. The puzzle became a backdrop to conversation, gift-giving, and laughter. By the time evening arrived, the puzzle was 80% done, so we turned off the lights to experience a more complete picture glowing in the dark. We stood around the luminescent image, “oohing and aah-ing” about the snow glimmering in the moonlight and stars lighting up the sky. Santa’s workshop glowed with fire and fantasy. The radiant fragments of unsolved pieces summoned us to put them into place.

Everyone got energized to see it completed—effort and anticipation mounted. Eleanor and I persisted until after midnight when the final pieces fell into place … and we bid “to all a good night.”

Happy New Year! This episode conjures fond memories of my final days in 2017 and also sheds light on a wide range of challenges that professionals face—from developing a new product or service to restructuring an organization to launching a research project. A simple story, it reveals some deeper truths about how big, complicated projects take shape.

It’s a Journey—Large, collaborative projects often involve some dramatic elements, starting when the initiative feels large, ambiguous, and overwhelming. Tensions mount as deadlines and curve balls are thrown into the mix. Personalities may shake it up further. Resource constraints and stakeholder resistance challenge the team. Then there is a pivotal insight, when the path forward becomes clear and exciting. Stakeholders get engaged and inspired. The execution team is “all in.” The project gets green-lighted, and the results put a smile on your face. Not all these narrative elements play out, but tension is a common theme.

Defining Boundaries—Early on in a change initiative, it helps to define the scope of the project. Assembling the edge pieces is an important step in the early stages of solving a jigsaw puzzle. Similarly, alignment on what is in and out of scope ensures that a team focuses on the right questions. During our puzzling, we used a ruler to define the scope and scale of the image. Similarly, benchmarks are useful when navigating project ambiguity. Boundary definitions bring clarity and focus to a project and relieve anxiety about expectations. A simple list of what’s in and out of scope can be really helpful to a team during project launch.

Gaining Perspective—Solving a jigsaw puzzle is all about gaining perspective. You pick up a piece and examine it from different angles to determine where it fits. Moving to a different position allows you to see the puzzle from a new angle. Drilling down to the minutiae and laddering up to the big picture in iterative steps helps to make sense of data. Taking a break to engage in playful or restorative activities inspires new energy and insights. Troubling problems get decoded and frustrations fade after a mental, physical, or spiritual break.

Value of Collaboration—Solving a 1,000-piece puzzle in two days was possible because of teamwork. The puzzle unified seven people in a common experience where they could participate at varying levels.

Little Connections Make a Big Picture—From specks of color and texture of variant shapes emerged an image of a cheery Norman Rockwell-like image during daylight, plus a mesmersizing radiance in the dark. A thousand little pieces formed a 20×27-inch image that engaged and delighted a family gathering, ranging from 20-somethings to 70-somethings.