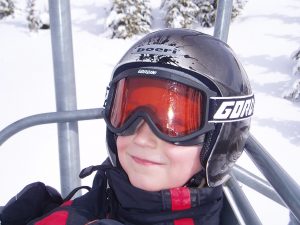 “Turn off the wind!” 5-year-old Jackson hollered. We were paused to wait for others to catch up a short way into our first run of our second family ski trip to Red Lodge, Montana. The whole family was excited to ski Lazy M again, a 2.5-mile cruising run. Abby, Jackson, and I looked over the spectacular vista while a howling wind slapped our faces.

I bent over to adjust my boots, when I heard Abby yell, “Mom, Jackson just took off straight down the mountain.” She was 10 and a strong skier, so I told her to chase him. Meanwhile I yanked on my gloves, grabbed my poles, and took off after them. He was out of reach and kept getting farther ahead. The minutes felt like hours as I skied to the limit of my ability (honed from a few years of ski racing in high school) to catch up with him.

Eventually, I found Abby at the top of a double-black-diamond trail. She pointed to a crowd gathered around Jackson at the bottom and said, “He came around the corner and went flying straight down.” (We intended to take a chicken run around the steep moguls.)

Pushing my comfort zone, I picked my way through the moguls—some of them were tall as Jackson’s waist. How could Jackson make it down this slope without falling! When we reached the crowd, a nice woman told me that she saw Jackson heading straight for some trees and hollered at him to fall over. Snow-covered, shaking, and bawling, but he wasn’t hurt. With comfort from me and Abby, he calmed down and the crowd dissipated.

One man started skiing away, then stopped, and climbed back up to us. He looked me in the eye as he shook his head in amazement, “Unbelievable … that kid must have been going 50 mph when he turned the corner onto the black diamond run—he made Bodie Miller look slow. It’s a miracle! There must have been twenty angels watching over him!”

Not a shock … Jackson didn’t want to ski any more. He was done with Lazy M … wanted to go home. I knew that what happened next would affect his approach to skiing—possibly, for the rest of his life. He had been taking ski lessons in Minnesota where he picked up the habit of taking a few turns at the top, then bombing the short distance to the bottom. He was a speed junky and a little cocky about his burgeoning ski skills.

At that age, he loved cowboys even more than skiing. So I reminded him about the scene in his favorite cowboy movie, when the hero declared “you just get back on the horse.” We boarded the chair lift and chatted about skiing fast. I pointed to a seam in my ski pants and said “On this side of the line, skiing fast is fun and thrilling. But on the other side, it’s scary and dangerous. Today you crossed the line to the dangerous side. You have the turning skills to stay in control. We are going to ski Lazy M again so you can show us how to use your turning skills to ski on the fun and safe side.”

We skied Lazy M many more times that trip and had fun. Jackson never lost control again. He followed directions and didn’t take off without warning. Certainly, a happy ending, perhaps it was a miracle or “twenty angels?”

Get Back on the Horse 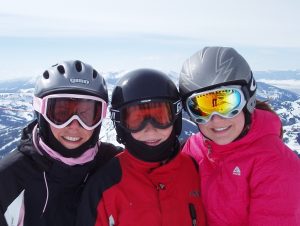 When Bodie Miller was commentating during the 2018 Winter Olympics, Jackson’s bomb down Lazy M in 2003 came flashing back. All these years later, the memory remains terrifying. However, by “getting back on the horse,” his brush with disaster become a learning journey. (Photo to the right is the three of us five years later in Big Sky, Montana).

Face Fears—After a scary or jarring experience, quitting feels like a safer path forward. It can be the right choice, but running away from the fear will make it bigger. By giving a challenge another try, you create the opportunity to conquer it and shrink the “monster named fear.”

Learn from Mistakes—Jackson learned some important lessons about skiing safely that day: stay with your parents, ski in control, and fall over when you can’t stop or slow down. He became a stronger and smarter skier. Likewise, worksite disasters and professional mishaps can be turned into learning for the future.

Create a New Ending—Rather than allowing a scary episode to be the end of a story, by “getting back on the horse,” you create a new ending. Jackson and our family have taken many more ski trips to the Rocky Mountains. Now, he lives in Colorado and skis every chance he can (still skis fast!).

“A person who never made a mistake never tried anything new.”
—Albert Einstein