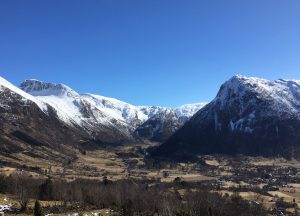 As I set off for school with my older sister, Cindy, I heard the neighborhood kids shouting, “There’s Cindy Big Meadow!” and chanting, “Jean Big Meadow!” I shrunk away, confused and embarrassed, while Cindy went off to figure out what was up. Cindy came back to explain that our neighbors’ Norwegian grandma was visiting. She had told them that “stör” means “big,” and “li” is a valley or meadow.

I learned that in Norway, the oldest son inherited the family farm. While the younger sons were sent off to find a new home. Traditionally, they took the name of the new land they settled. This understanding about my name transformed children’s taunts into pleasant images of my ancestors’ pastoral homeland.

I imagined that they lived in a beautiful, big meadow surrounded with wooded hillsides. The adventurous journey of a young man finding his place in the world also intrigued me. I imagined that my Storlie ancestors, who immigrated to America in the 1800s, brought their “stor li” spirit of adventure to find peace and prosperity in new meadows and valleys in Minnesota and Wisconsin. My childhood fairytale omitted the hardship, struggle, and loss that these stalwart settlers surely faced.

Ahead of a recent trip to Norway, I combed through a packet of booklets, notes, and news clippings that my parents had collected to learn about my Scandinavian roots. My mom also shared her memories about my ancestors and their life on a Wisconsin farm in the early-20th century. Some of this research shed new light on childhood fantasies about my ancestors. All of it tickled my curiosity about the stories behind the facts.

Lulled by the hum of the train during my trek across Norway, I stared at breathtaking scenery, thinking about my Storlie ancestors’ trek to America. Their voyage started via oxcart down very rugged mountain terrain 70 miles to the port of Drammen. Then they crossed the Atlantic Ocean in steerage class and ventured into the heartland of America. 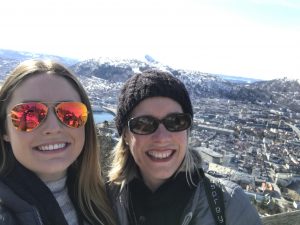 Genealogies that chronicle bare facts (names, places, birthdates, marriage dates, lists of offspring, death dates, etc.) can be pretty boring to read.  But these dry facts often point toward juicy stories of human tragedy and triumph—and all the other dramatic experiences of life in between. I love historical fiction because it uses both analytical and creative tools to capture a place and time. In this issue, I will share some raw story gems that I extracted from genealogical info about my family, along with some questions that sparked my curiosity. Next month, I will develop one of these gems into a historical narrative.

Origins of the Storlie Name—Knud Knutson Thoen Storelie was born in 1790 at the Thoen Farm in Hallingdal, Norway. His birth name was Thoen, and he is my ancestor who became a Storelie when he and his family settled into the Storelie farm near Nesbyen. The farm had been purchased by his father with profits from the rich black soil on the Thoen farm (different from my childhood impression that he’d wandered around impoverished until finding a new home). Both the Storelie and Thoen farms are situated on a forest-clad mountain. The men worked the forest in the winter and farmland in the summer. Knud was a skilled silversmith and pursued this avocation in his blacksmith shop during the long winter months. He had two wives with two sons from each marriage. He died in 1845 at age 55.

Storlie Sons Immigrate to America—Their father died when the oldest son, Knute K. Storlie, was 15. At 22, Knute and his brother, Ole K., immigrated to the United States in 1852. (They changed the spelling of their name to Storlie.) Knute initially settled in Rock Prairie, WI, but moved west to Spring Grove, MN in 1857 where he bought a farm. His bride, Anne Skogen, also from Hallingdal, joined him in Spring Grove in 1858. Knute’s younger half-brothers (Ole K. (the 2nd) and Christian) followed them to Spring Grove in 1859. Their uncle, Arne Thoen, took over the Storelie farm after all four sons left Norway. To board the ship, they were required to bring provisions to sustain them for 12 weeks. Plus they took the practical items needed to start a new life. Why did Knute, the oldest son who by tradition would have inherited a rich farm, leave it for a new life in America? Did he have a thirst for adventure? Or perhaps he had a falling out with his Uncle Arne after his father passed?

“I Can’t Leave My Baby Behind”—The youngest of thirteen, my mom’s grandma, Mimmi (Mary), was born outside of Tromso in Malsev, not far from the Arctic Circle. When she was about a year old, her parents had entrusted Mimmi with their grown children as they boarded a boat to resettle near Oslo in 1879. Mimmi’s mother suddenly ran off the boat and declared, “I can’t leave my baby behind.” Mimmi and her family lived near Oslo until she was 10, then migrated to Eau Claire Wisconsin, where she later married Clarence George Sprague. Mimmi was short and spry, an excellent seamstress, quick witted, and tidy. They had two children: Helen Marie and George Clinton. George married Esther Amanda Hysen (a school teacher) in 1927, whose parents had immigrated from Sweden when they were newlyweds. They were my mom’s parents and lived with Mimmi and Helen when my mom was young. What sort of life were Mimmi’s parents leaving in Malsev? And how could they have imagined leaving a baby with relatives?

A Grief Walk from New York to Wisconsin—A year after his first wife and 10-month-old son died of influenza in 1853—three days apart—my great-great-grandpa, George Asa Sprague, left upstate New York and migrated west on foot, eventually settling in Eau Claire, Wisconsin in 1855. He built the first ferry across the Chippewa River, then turned his attention to farming. He married his second wife, Alma Ann Amidon, in 1859 and had three children. Their oldest son died at age six. He died at the age of 80 in 1904, as a prominent citizen in Eau Claire County. His obituary reports, “A line of carriages three-quarters of a mile long followed him to his grave.” Mimi married his son, Clarence George, who like his father was active in civic affairs. My mom remembers George Asa as a stern and morose man—perhaps his personality was shaped by his losses?

Farm Life in Wisconsin—George and Esther had four children and raised them on the farm that George Asa founded. Esther taught in a one-room school, in addition to her farm work. Although it was the Depression, their rich farmland and work ethic allowed them to survive without too much hardship. My mom, Lois, the oldest child, was spoiled by all the adults who lived on the farm. Her Grandpa Clarence, a revered civic servant, was a big tease and took her all over the county in his 1928 Chevy. After he died in 1938, Mimi and Helen continued to live with them for a few more years then moved to a house in Eau Claire. Aunt Helen, who remained single until her 30s was a “professional woman” and worked in Eau Claire; she doted on Lois. What was it like for my grandma to live with her in-laws while teaching school and managing a farm kitchen? 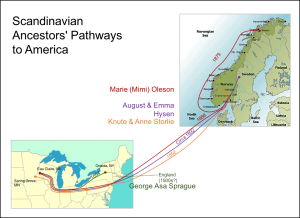