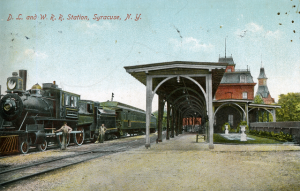 George Asa Sprague felt numb as he turned his back on his home where he had lived with his wife, Lydia, and baby son, Oscar, on the shores of Lake Skaneateles near Syracuse, New York. It was the summer of 1854, and his young family had been destroyed a few months earlier when Lydia and Oscar had died of influenza only 10 days apart. Little Oscar had been only seven months old.

George’s work building railroads in central New York had provided a secure life, but it had taken him away from home for long periods of time. He knew he would never forget the shock and horror of coming home to learn that influenza had struck their community. He had clung to Lydia until the end, but it was too late. Losing his 19-year-old wife was heart wrenching, but when his 7-month-old son died 10 days later … grief engulfed him.

He’d been working on the construction of the Syracuse-Binghamton Line which just opened, so his current job was done. There was plenty of work building other railroads nearby, but George was done with trains. Deep in his heart, he blamed himself and the railroad for his family’s tragedy.

His brother, Benjamin, was enchanted with westward migration. Antsy to explore, Ben thought it would do George good to get away from his haunting memories. When they left home that summer, they wove their way north along the ridge between the Finger Lakes of Skaneateles and Otisco until they reached the Erie Canal. Then they headed west by canal barge to Buffalo.

At Buffalo, they took a steamboat across Lake Erie. George couldn’t endure watching the traveling families. Babies’ cries and laughter seared his heart. He focused his attention on boating operations … he became mesmerized with the rhythms of their work. Watching the sun set on the water calmed his aching heart. In these tranquil moments, he soaked-in the details of how the captains navigated the wind and water. George noticed the similarities between train and boat transportation: ticketing, waiting, boarding/de-boarding.

When they landed in Toledo, George still didn’t want to travel by train.  So, he and Ben walked the paths of settlers who made their way west in wagons to the rich farmland that had opened up when Wisconsin had become a state six years earlier. They kept to themselves and sometimes stopped to explore territories and earn money. As they progressed west, George imagined a more settled life … if he had another chance. 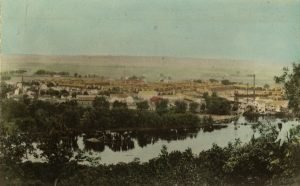 In 1855, Eau Claire, Wisconsin, was a portal for the booming logging and lumber industry of northern Wisconsin. Everywhere George looked, he saw buildings, homes, and roads under construction. Some people passed through; some decided to stay. Westward migration had spurred a demand for lumber, and Eau Claire was well situated between the Eau Claire and Chippewa Rivers to supply this need. The rivers brought logs downstream from pine forests to the north and supplied water-power for sawmills.

George was tired of traveling—they’d left New York months ago. He convinced Ben to stay in Eau Claire—at least for a while. In this bustling mess, George found a rene 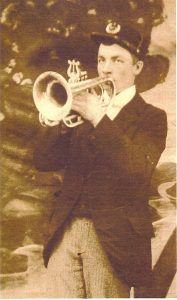 wed purpose. His memories of watching passenger boat operations became a plan for his future. He set about building the first ferry across the Chippewa River. Ben stayed to help him get started, but eventually moved further west. Years later they received a photo from him with an inscription on the back, “Uncle Ben and Aunt Hannah, Stockton, California.”

Eau Claire was changing … bridges were replacing ferries. George and Alma decided to shift their energies to farming. He used the profits from his businesses to buy 120 acres of rich farmland in the Chippewa River Valley just south of Eau Claire, where he built a fine house and had considerable success as a farmer. George also remained active in civic affairs. His third son, Clarence (my great-grandfather), was born on the farm in 1868. Clarence survived and turned the farm into a thriving dairy operation. George had found the life he’d imagined when he trekked west 20 years earlier.

He died on December 1, 1904, at the age of 80 as a prominent and respected citizen. According to his obituary in the local newspaper, “A line of carriages three-quarters of a mile long followed him to the grave.”

Last month, Storlietelling readers voted on which story gem from my family history they wanted me to develop into a story. Readers chose the “Grief Walk from New York to Wisconsin,” so I took on the challenge of delving into this historical episode in greater detail. With guidance from my historian husband, I did some research that helped to put my collection of genealogical facts into a broader context and fill-in some gaps in the story. From there, I had to rely on my imagination to tell the rest of the tale. This is what I learned:

Choose a Point of View—One of the many choices a writer makes is:  from whose perspective the story will be told? For this historically-based story, I chose to write in the Third-Person Limited perspective, in which the narrator sticks closely to one character in the story. The narrator sees what the character sees, hears what the character hears, and has access to the character’s thoughts and feelings. The narrator is also able to observe things that the focal character cannot observe and can make commentary on the events. By writing with this technique, I kept asking myself, what was George experiencing and how was he processing the world around him? It was a good exercise in gaining empathy for a character.

Explore Societal Trends—A little digging into historical research helped me connect some plausible plot points in the story. Railroad building around Syracuse in the 1850s was booming. George could have kept very busy, but he would have had to work at remote and ever-changing worksites. Family records show that George’s journey took a year to travel to Wisconsin, so I explored various travel options and how long they would have taken. The train would have been the fastest—a few weeks to a month. But the Erie Canal was very convenient—about 15-20 miles from where they lived—and traffic on the canal peaked in 1852. It seemed a likely option for two young men traveling light to hop on a barge. The bulk of settlers to Eau Claire, Wisconsin, in 1855 came by wagon trails from the east, with a large migration from northeastern states. Trains did not arrive until 1859. Traveling these trails on foot could have taken 6-12 months, depending on the time of year and the length of stops along the way. These facts helped me plot a hypothetical trail.

Make Sense of “The Knowns”—My Uncle Clarence compiled a history of George Asa Sprague based on obituaries, family bible entries, family photos, and other genealogical research. In coupling these facts with broader historical forces, a few facts became the backbone of the plot:

Imagine “How It Might Have Happened”—With the set of facts and insights my research had yielded, I let my imagination explore possible scenarios and chose a plausible narrative that reflects my empathy for George and deeper understanding of life in Central New York and Western Wisconsin in the mid-1850s.