Frightened and Lost in a Corn Maze 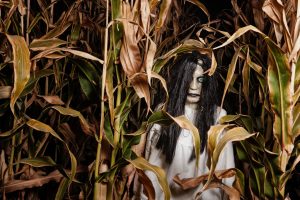 A zombie with a chain saw blocked our exit from the Haunted Maze which sent us screaming in the other direction. After a few more scary encounters, we made our way out of the maze with our hearts racing. A cup of hot cider calmed our nerves and warmed our toes on this cool, crisp October evening in Menomonie, Wisconsin, where our daughter attended college. The Haunted Maze had taken fifteen minutes (which seemed frighteningly longer). So, we decide to wander into the Challenge Maze, thinking it would be a relaxing stroll to cap off our evening.

Our group consisted of my family of three teenage kids, my husband, and me, plus two of our daughter’s college girlfriends. After wandering in the maze for 20-30 minutes, everyone was ready to find our way out and wrap up the evening. But after three or four attempts brought us back to the same spot, nerves began to fray. Someone had to use the restroom, someone was cold … everyone was done with this adventure.

Someone took charge and said, “I hear the interstate in that direction, so that is north. We came in on the east, so I think we should take that route.” When that route failed, someone else spun another logical sounding plan, which also brought us back to same spot in the maze. A few more rounds like this ensued.

Frustration and fatigued propelled us to The Bridge—a lit and raised platform in the middle of the maze with staff who could provide directions. One of them outlined a set of instructions and sent us on our way. We missed some turn and soon we were back in The Spot. After a few more attempts to get out, our arguments, anger, and angst sent us back to The Bridge. This time, an escort walked us out. Our 20-minute, relaxing stroll had turned into a two-hour ordeal.

Words were sparse on our hayride from The Corn Maze to the farmhouse where our cars were parked. Our nerves calmed after we returned to civilization and familiar surroundings. 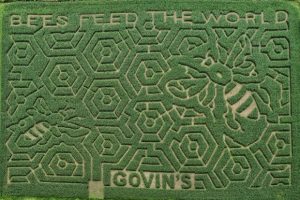 About five years after our adventure at Govin’s Farm, I gathered family members’ input to help me compose this story. After learning that everyone had wildly different versions of events and that we only recalled a few vivid moments the same way, I abandoned the story. Now, a few years years later, I’m giving it another try because
I’m drawn to how this episode reflects David Hutchens’ universal plot, The Fatal Flaw, and what we can learn about collaborating and coping during stressful worksite situations. Hutchens breaks The Fatal Flaw down into five plot elements:

We Were Confident
Expecting to succeed, we took on a challenge with swagger and boastfulness. We thought, “A 20-minute stroll in the maze, then we’ll head home.”

Enter a Situation Unprepared
We weren’t planning to be out so long on a chilly fall night. Members of our group were getting really cold and uncomfortable. Discomfort contributed to how this adventure had stopped being fun.

Vulnerability Exposed
Our resilience worn thin, and we devolved into bickering and blaming each other. Collaboration fell apart. Trust in each other’s well-intended efforts to find our way out diminished as time wore on. Our character flaws and family dynamics accentuated the dilemma.

We Fell
We had to ask for an escort out. We never solved the puzzle of the Challenge Maze, even after we had been given guidance. Our nerves were raw and we were ready to give up.

Deeper Awareness
Hutchen’s depicts the last step, “Today we have a deeper self-awareness or a plan for going forward. We are ready to try again and win.” I can’t say that any of us were forever changed by this experience. But in the future, we may think twice about what sort of mazes we wander into—and how we dress for an evening outdoors in the fall in the upper Midwest!

Learning from a Fatal Flaw can profoundly change us as individuals and teams. That’s why taking time to do a post mortem on an intense project is so valuable to teams. We can all learn from Nelson Mandela’s wise words, “I learned that courage was not the absence of fear but the triumph over it.”

Disclaimer: The participants in the adventure may not agree with the details of how I’ve told this story. I referenced my notes from their input three years ago and relied on my most vivid memories.