Why Does a Jock School Need a Computer? 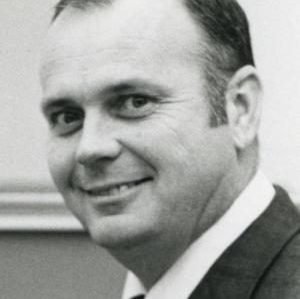 One of the Regents had scoffed at his idea, “Computers? Aren’t those gadgets that physicists at Madison play with? Why does a jock school like La Crosse need a computer!?” (UWL was known for its physical education department, the largest in the state’s university system.)

But John “Jack” Storlie didn’t give up. He returned to the university and continued his advocacy for the transformational potential of computers, in both administrative and academic functions. He was an assistant professor of chemistry and had recently completed a 6-credit, summer course in computer programming at the University of Southwestern Louisiana on a study grant from the National Science Foundation (NSF). After that summer, he became an evangelist for this new technology.

One day as he ranted about the Regents in the faculty lounge, one of his colleagues, a physical education professor who specialized in kinesiology, mentioned that he’d read about using computers to handle the extensive numerical analyses required for motion studies on athletes. The two of them wrote a NSF grant application, were awarded the grant, and conducted a performance study on the university’s football players.

Jack also continued to roam the halls of campus, calling on faculty to explain how computers could accelerate their research agendas and tirelessly advocated with the university’s administrative hierarchy to fund his dream. He proposed that they not only get onecomputer, but two—one for administrative functions and another for academics. He predicted that the administrative needs would be so vast that they would use all the bandwidth. When he described a future workplace where everyone—even secretaries—would have computer terminals on their desks, they laughed, “Secretaries? Why would secretaries need computers?”

Armed with a successful motion study that resulted in a published paper, he returned to the Board of Regents a few years later. “The last time I was here, I was asked what a PE School would do with a computer?” He showed them the article and continued, “This is what UWL can do with computers.” He illustrated the potential academic and administrative applications for computers—which could transform every university campus. In the end, he prevailed in securing funds to install two mainframes—one for administration and one for academics.

After Madison, UWL became the second campus in the UW system to install a computer. He later set up a network of satellite systems that provided connectivity to public schools and universities in Wisconsin, Illinois, Iowa, and Minnesota. In 1968, the UWL Computer Science Department was founded. At this juncture, Jack abandoned the chemistry classroom to lead both the academic and administrative computer science programs.

In October 2018, my family joined current and past faculty, students, and staff for the 50th Anniversary Celebration of the UWL Computer Science Department. My dad, who passed five years ago, would be happy to know that the Department currently has 312 computer science majors, 46 minors, and 28 graduate students. And the endowed scholarship fund that my parents established in 1998 has awarded $23,000 in scholarships to 26 computer science students.

Archetype of a Visionary 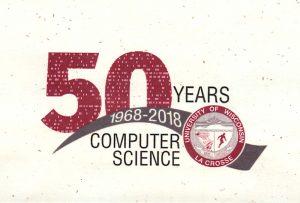 As we chatted, I suggested that she reference an article in the La Crosse Tribune from 2008 which summed up the story well. It turns out that KJ had written that article when she was a columnist for the La Crosse Tribune. She told me that after the interview, my dad had come to her house to repair her router. (At 80, he still provided technical support to friends, neighbors, and former colleagues.) For the 2018 story, KJ was seeking the family’s perspective (which appeared in the La Crosse Tribune on Oct. 29, 2018).

My family gathered with KJ ahead of the celebration to share memories and stories. My brother, John, told the tale about how Dad had taken on the Board of Regents. With his detailed recounting of this episode, my memory flooded back and I vividly recalled Dad’s rants about the Regents. Jack’s battle with the Regents reflects the archetype of the lonely visionary, who is driven by a dream, but encounters critics who throw up barriers. The visionary makes sacrifices and unveils the creation to acclaim (or derision). Today, the world is changed  because of the visionary who is recognized, fulfilled, and rewarded. This tale also offers some practical lessons for innovators who work in both companies and academic institutions.

Bold and a Bit Crazy
Jack imagined a future where computers would transform everyday life at the university and helped others envision how they could be a part of the change. When others see yourvision as theirvision, an innovation can get traction. Even when no one believed him that everyone would have computer terminals on their desks, he kept pushing for twocomputers.

Top Down and Bottom Up
Jack advocated relentlessly with the University administration from the chancellor up to the Board of Regents. Meanwhile, he helped his academic colleagues dream about how computers could accelerate their research and discoveries by replacing the tedious and lengthy process of analyzing data with a slide rule and manual calculations. By creating both pull and push, he greased the skids on the adoption curve.

Academia-Government-Industry Collaboration
Government funding seeded the early discovery. NSF grants enabled both Jack’s academic studies in computer science and also funded the critical motion-study grant. During the years of advocacy, Jack hosted Burroughs and IBM for campus visits to illustrate their technology to the university’s administration and faculty. They engaged in his bold experiment by providing some knowledge transfer and initial funding. In turn, university graduates became a talent pipeline and the program showcased a model for other universities.

Let Go of the Past
In order to fully embrace the future he fought so hard to achieve, Jack hit a turning point where he had to make the hard choice to leave his vocation as a chemistry professor. My mom says that he always missed the classroom. But the bigger dream of computers swept him into the whirlwind of change.

Computers and their paraphernalia were part of the fabric of our family life. My siblings and I all have vivid memories of our Dad, “giddy with excitement,” when he brought home the “dial-up terminal” in a large rolling suitcase. It looked like an oversized typewriter that plugged into a shoebox-size coupler with squishy pockets that hugged our telephone handset. All five of us (age 2 to 14) were imprinted with computers from an early age. None of us majored in Computer Science, but we all flex with technology more than most Boomers.

Jack was right that everyone would have a computer on their desks, but even he didn’t imagine that we would all be carrying computers in our pockets and wearing them on their wrists.