When You Find Your Tribe … Reach for the Sky 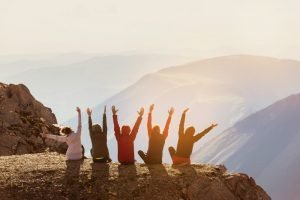 Signing a petition changed my life. It was the fall of 1981. Leafing through the member newsletter from the American Dietetic Association, I saw an announcement that some dietitians were forming a practice group in Sports and Cardiovascular Nutrition. The group would be called SCAN, and they needed signatures for a petition. I was finishing a master’s degree in adult fitness–cardiac rehabilitation, an atypical choice for a dietitian at the time. Because of my non-traditional career path, I felt like a “fish out of water” in both professions.

I reached out to one of SCAN’s founders, Marilyn Schorin, and proposed that we develop a SCAN session for the upcoming conference of the American College of Sports Medicine in Montreal. She jumped on board, and six months later I met my first SCAN colleagues. They weren’t like any other dietitians I knew. That was when I found my tribe.

Later, when I was moving from Wisconsin to Dallas for a job at the Cooper Aerobics Center, I reached out to Georgia Kostas, the nutrition director at the Cooper Clinic. Georgia welcomed me with open arms―she even found me an apartment, so I had a place to live when I arrived. Who does that for a colleague you barely know? Someone in your tribe.

Through my volunteer work over the next decade, I met hundreds of dynamic dietitians who shared my passion for pursuing blended careers in nutrition and exercise/fitness. Their trailblazing energy swept me into a whirlwind of possibilities. I grew as a leader. The many friends I found helped me navigate life challenges. But shortly after serving as chair, I got married had three kids. SCAN took a back seat to family life and my corporate job … 20 years flew by.

Fast forward to 2011. On the cusp of another career transition, I attended the SCAN Symposium where I heard that SCAN was organizing a 30th Anniversary Celebration. A little voice in my head told me to raise my hand to help. That decision―just like signing the petition in 1981―started a new chapter of SCAN volunteerism. I’ve served on the Executive Committee for the last five years, working with different SCAN members. Faces and names are new, but they are still my “peeps.” 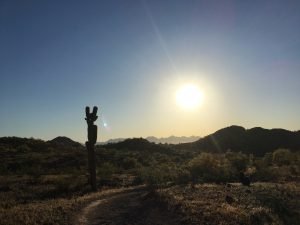 I just attended the 35th Annual SCAN Symposium in Phoenix and have been reflecting on this story, which I originally posted in 2015. Every time I travel to SCAN, it feels like I step into a time capsule. It’s 1981 and once again I’ve found my tribe. Why does finding your tribe help you reach high places and see the world differently?

You Can Be Yourself

Unlike other social settings, where we might feel pressured to “fit into a mold,” when we are in our tribes, we don’t feel judged for candidly expressing ourselves. Authenticity leads to deeper and more trusting relationships. Colleagues turn into friends. These connections strengthen our commitment to the tribe and the people in it.

You Care About the Same Things

My SCAN colleagues and I shared similar career goals and values. We also bonded over a mutual commitment to building SCAN as a professional organization. Individual work and leadership contributed to something bigger than what anyone could have done alone. More people joined. Collective energy led to success: SCAN membership grew from 500 to over 3,700 in the first 10 years. With over 6,000 members, it is now the largest practice group in the Academy of Nutrition and Dietetics. When a tribe stands for a higher purpose that matters to people, it can accomplish phenomenal results.

You Reach for the Sky

Tribes can disrupt the status quo, start movements, and leave a mark in the world. My SCAN tribe energizes me because the people in the group are bold and daring. They chart new territory in their individual work and for the organization. I’m drawn to people with the courage and tenacity to create change. Perhaps it’s not a universal reason why people connect to social networks, but groups with the power to create change gain the momentum to make things happen.

For me, an organization has to be more than work. When I find deeper relationships, emotional connections, and playful outlets, the work is more enjoyable. I give more, and I get more.

“When you find people who not only tolerate your quirks but celebrate them with glad cries of ‘Me too!’ be sure to cherish them. Because those weirdos are your tribe.”
― A.J. Downey, Cutter’s Hope