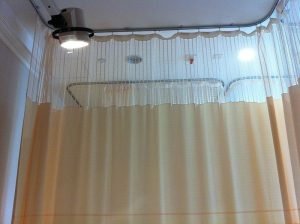 In the middle of the night, my husband, Jay, was rushed to the ER by ambulance with a kidney stone emergency. I couldn’t go with him because at the time our kids were too young to leave them home alone.

I found him the next morning in a shared room with the curtain drawn. His roommate (we’ll call him Joe), Joe’s wife, and the two of us sat quietly in our semi-private spaces listening to the beep and drone of hospital noises. Jay passed me a note that Joe was upset to learn that he’d had a mild heart attack last night. Suddenly, a clinical dietitian burst through our silence to give Joe “his Discharge Diet Instruction.” Barely pausing to breathe, she kept saying, “I’ll just go over this quickly.”

As a dietitian myself, I couldn’t help but eavesdrop. When she started to explain the “Exchange Lists for Meal Planning,” I reeled into a 30-year time-warp … back to my dietetics training in the 1970s. Even though the “Exchange Lists” had been replaced a decade earlier, she blathered on about them in excruciating detail. We heard about all the foods he couldn’t eat … and the alternatives foods that he could eat. She described portion sizes, label reading, menu planning, grocery shopping, and restaurant dining. She lectured to him—never gave him a chance to talk.

The dietitian repeatedly advocated for specific pre-packaged foods that would be “so easy” for him and his wife because they contained two servings. After her fourth or fifth example, Jay handed me a note, “They have six kids!”

Fifteen minutes later, she wrapped up her consultation and left him with a stack of handouts. Her fruity perfume lingered in the air long after she left. My memory of her “nutrition lecture” has lingered far longer. I imagine that all Joe heard was someone talking like Charlie Brown’s teacher.

Twenty years before this episode occurred in the early 2000s, the profession of dietetics began to overhaul protocols for “Discharge Diet Instructions.” Dietitians started to ground their counseling in education and behavior change theories. They recognized that the hospital discharge timing is not conducive to facilitating lifestyle change. I never learned why this hospital (or perhaps this dietitian) was using an outdated protocol. But the story imparts a few valuable lessons about effective communication, especially when conveying technical or scientific information.

If the dietitian had taken the time to learn Joe’s story, she would have known that her recommendations did not fit his life. More importantly, why didn’t she realize that he wasn’t ready for a sweeping dietary overhaul? Assuming that she worked with cardiac patients every day, she would have had chances to learn what people experience in these situations. In addition to understanding your audience’s emotion state, take time to assess their level of knowledge before starting to explain. In the book, The Art of Explanation, Lee Lefever uses an A to Z Knowledge Scale with “Less Understanding” on the A side and “More Understanding” on the Z side. Many experts assume that their audience has knowledge in the H to Q range, when they are really somewhere between A to D.

Package Data in a Story

Stories help to build rapport and trust. In addition, stories are effective in addressing the human aspects of situations. On the day that Joe learned about his heart attack, the lifestyle change aspects of heart disease loomed large and threatening. Stories of hope, delivered with compassion and empathy, can diminish these fears. Imagine if the dietitian had told an inspiring story about someone who became more fit and active during cardiac rehab, then realized that his heart attack had given him a new lease on life. By helping him imagine a positive future, Joe’s courage and confidence would be bolstered. He could be more receptive to a few tips for how he might change his eating habits.

The dietitian did not have enough time to teach a complex diet plan that requires a lot of baseline information on food lists, portions sizes, dos and don’ts. In a 15-minute counseling session, people can absorb one concept or perhaps three simple messages. In contrast, too much information crammed into a brief encounter results in people learning less, not more. Talking fast only makes it worse. When they’re emotionally distracted, people absorb even less.

Zoom out and look at the content from the broadest perspective possible. Let go of details and caveats; instead focus on the big picture. Get comfortable trading off your audience’s understanding for accuracy and thoroughness in your explanation. Connect key principles to ideas that the audience already understands. Use pictures and visuals to reinforce important concepts and create a memory device. Go ask someone who knows nothing about the topic if they understand your explanation. If they don’t, simplify more.