The (Hi)story of a House 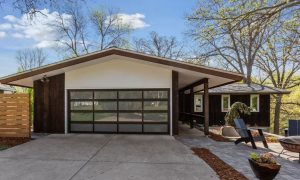 On a dreary, rainy day in May, we decided to visit an open house that had just come on the market. We were contemplating a downsizing move but had not started to search for new homes. The whole process of buying and selling seemed daunting. But the gloomy forecast gave us an incentive to check out this property. Our grown daughters got excited and decided to join us for the tour.

We immediately fell in love with this mid-century modern home nestled on the banks of a creek just outside of Minneapolis. I looked around for fifteen minutes and knew it was the house for us. A few non-verbal exchanges with my husband told me that he was feeling the same.

As other prospective buyers paraded through the house, my heart started to race. “Could we possibly pull this off?” “Can we afford it?” “Will we get into a bidding war?” “Why didn’t we start to prepare our house to list and get prequalified for a loan months ago?” A cocktail of emotions—excitement, anticipation, anxiety, and hope—propelled me out the door and into our car.

Our daughters piled into the car with us, and we started to drive around the neighborhood. The more we saw, the more certain we became that this was the house for us. Our daughters spurred us on, “This house is perfect for you. You should buy it. Do it! Do it now!”

Uncertain about how to start the process, we decided to call our realtors (a husband and wife team). They were in Kansas for their son’s graduation, but agreed to work with us to prepare a formal offer in between graduation events. That was 2:00 p.m. and by 10:30 that night we were prequalified for a loan and had submitted an offer. The next day we learned that there were competitive bids on the home and the seller had asked all buyers to come back with their “best” offer.

With sage and clever advice from our realtor and financial planner, we stretched within our comfort zone on risk tolerance and used some non-cash levers to make our “best” offer more attractive. Over the next 24 hours, we anxiously awaited the news on how we would fare in the bidding war. But 51 hours after setting foot into the house for the first time, we learned that it would become our new home on July 15, 2019.

A chaotic summer of buying, selling, and moving landed us in the perfect house situated on a bubbling brook that delivers everyday delights. Not only is the house proving to be everything we imagined, it has brought wonderful surprises that we didn’t expect.

After we moved in, one of my friends asked me, “How did you find this house?” When I told him the story, he said, “Sounds to me it’s like the Hogwarts’ Sorting Hat … the house found you.”

Finding the Stories in Objects and Things

In July, I was in Manhattan helping a business team develop stories about a consumer product. The team was struggling to come up with story ideas about the product—an inanimate object. This is one of the hardest—yet most important—challenges that teams face when communicating a business case through storytelling. Once I suggested that they explore the human angles of the product, story ideas spilled out. They thought about the people who might use the product: what are their life circumstances and struggles? Soon a kaleidoscope of stories came into focus. The team considered various people who touch the product: current users, new users, the inventor, the employees who make the product, and inhabitants of exotic locations where the ingredients are sourced.

To find emotional connections to an object, delve into the places and events related it. Let’s use the house example to explore some story angles. 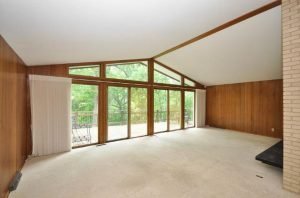 A number of fascinating people contributed to the story of our new house. It was designed in 1963 by a woman architect, named Elizabeth Close. She was born Elizabeth (Lisl) Scheu in Austria in 1912. After studying architecture in Vienna for two years, she earned a scholarship at MIT where she met her future husband, Winston Close, in 1935. After graduate school the couple settled in Minneapolis and established their own firm. Elizabeth earned a national reputation as a pioneer in mid-century modern architecture. She created simple, compact homes that feel spacious by connecting them to nature. Clever use of built-ins maximize floor space and reduce clutter.

Adrian Helgeson, our home’s original owner and the Close’s accountant, commissioned Elizabeth to design the house. It reflects his Scandinavian values, as well as Elizabeth’s signature style. Adrian and his wife raised their family in the home. Neighbors say that Mrs. Helgeson suffered a stroke in their later years, and he was devoted to her care. After she passed, he lived there alone until 2014, when his daughter moved him into a senior living community.

Original blueprints show that the house was situated on a gravel road with a private well. In 1963 when this house was built, the Village of Golden Valley was in the midst of a boom in residential development. In 1912, when the Electric Luce Line Railroad cut through the village, Golden Valley started its transition from an agricultural community with a few hundred residents into a growing residential community. By 1940, there were 2040 residents. But after World War II, industries settled and extensive residential development followed. Adrian secured a choice property during this residential boom and Elizabeth designed the home to take full advantage of its connection to nature.

In 1969, the Basset Creek Watershed Management Commission (BSCMC) was formed to control flooding and became a key influence in preserving the natural beauty of the creek for the last fifty years. Its stewardship kept the creek from overdevelo 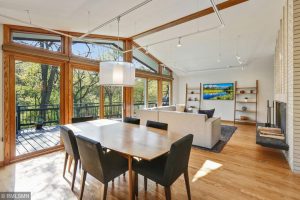 pment, pollution, and loss of its native charm. Golden Valley became a city in 1972, bringing paved roads and city water to the neighborhood.

The second owners remodeled the house to the studs in 2015. But they stayed true to the original design and aesthetic, but updated the infrastructure and all the finishes. Neighbors describe how Peter and his buddy, Ryan, cleared buckthorn and undergrowth to reopen the view of the creek. “They worked so hard and loved that house.” After turning the place into a dream home, Peter decided to move closer to his aging parents. No doubt it was a hard decision, but they left the home with warm wishes and loving touch.

Stories that pull on heartstrings will resonate more with people. When exploring the stories about a product or object, look for ways in which these episodes strike an emotional chord. For example, mid-century modern architecture is experiencing a resurgence—many home buyers seek the simple, affordable, energy-efficient, innovative houses that the Closes and their colleagues championed for many years.

Professional women find inspiration from Elizabeth Close, who pioneered in a male-dominated, technical profession in an era when few women worked outside their homes.  And those who did were usually secr 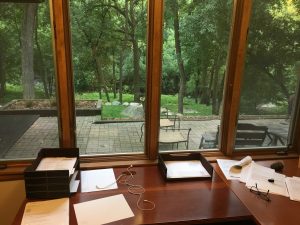 etaries, teachers, or nurses. Elizabeth also raised their children and ran their firm while Winston was away during the war.

Adrian Helgeson’s devotion to his wife and Peter’s commitment to his parents remind us of the importance of family during life passages. The BCWMC preservation of the creek resonates with environmental causes that are central to today’s public discourse.

When you find an emotionally relevant thread to a story about a “thing,” chances are your storytelling will have a more powerful effect. By exploring the people, places, and events related to it, you can find human angles and emotional relevance.

Every day, I gaze out of my office window to the bubbling brook below, enchanted by the view and all the history that brought me to this place. Perhaps our friend is right, “The house chose us.”