A Basket Case for Purging 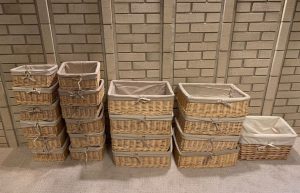 Grandpa Bill used to say, “Three moves are as good as a fire.” I thought of this quip many times this summer when we downsized from a sprawling suburban two-story home to a cozy, mid-century modern house on a creek. At first, deciding what to do with every single possession we’d accumulated during 29 years of marriage overwhelmed us. Eventually, the process of sorting and purging our possessions liberated us: Move, Donate, Sell, Toss.

At the tail end of this purging extravaganza, we found ourselves in a delightful new space. But our old systems for storing and organizing no longer worked. For example, the baskets that we used to organize our old laundry room did not fit, so I put them in the “sell” category. My family was skeptical about their value in the online marketplace, but I thought it was worth a try.

So, I advertised my set of 21 fabric-lined decorative baskets as a Decorative Storage System for $60, never imagining that it would become an in-demand item. Within 3 hours, I had 20 women clamoring for the baskets. But as it goes in the online marketplace, many people expressed enthusiastic interest then disappeared. I juggled their responses, communicating that the baskets were on a first come basis. After a buyer sent me $60 via PayPal, I took down the post and gloated to my family about my victory.

Three hours later, a woman messaged me that she was on her way to pick up the baskets and requested my location. When I informed her that she was too late, she replied, “What?! You sold my baskets?” I explained that she had not replied to my text, so I’d assumed that she wasn’t going to follow through. For the next four hours, she sent me a series of scathing Facebook messages, attacking my integrity and character. Every attempt to de-escalate only enraged her further. I disengaged with her but went to bed with knots in my stomach and had a nightmare that she defamed my online reputation.

Her bark was worse than her bite. She gave me a negative rating on Facebook marketplace, but it all dissipated quite quickly. Seriously, all that anger over a set of baskets?

When the buyer came to pick up the baskets, I felt like destiny landed them in the right hands. She was repurposing them for an annual fund raiser she leads to provide “bread baskets” for the hungry and poor.

While selling things we no longer need in the online marketplace took some effort (and a few stressful exchanges), I have a dozen other wonderful stories about how our discarded possessions found new homes and new uses.

Let Go of the Old to Make Room for the New

The start of a new year and a new decade inspires reflections on change and renewal. In the last decade, I retired from a corporate job and started a business. All three of my children transitioned from their teens to 20s and have launched careers. In addition to moving in 2019, I also finished a four-year journey of writing a book, Once Upon an Innovation, which will be released in 2020.

Reflecting on a decade of changes reminded me of William Bridges book, Transitions: Making Sense of Life Changes. Bridges frames the process of change in the context of universal truths derived from ancient cultures and tribal societies. He differentiates “change” from “transition.” Change is a physical or symbolic shift in our lives (e.g., marriage, divorce, moving, graduation, new job, loss of a loved one). While transition is the psychological and emotional adjustment accompanies this change.

Without transition, we get stuck in an endless cycle of fruitless change. We’ve all know someone who starts dating a new person soon after a break up. The name and face are different, but the relationship is the same. William Bridges asserts that we need to undergo three phases of transition in order to grow and renew through change: Ending, Neutral Zone, and New Beginning.

This phase involves a symbolic death or letting go of the past. For example, tribal societies ritualized coming of age in ceremonies that marked the end of childhood with an extinguishing of outgrown ways. In some tribes, the childhood name and clothing are discarded. Purging our possessions and leaving the home where we raised our family was an ending that made way for a new chapter in our life and marriage.

The metaphorical phase of “wandering in the woods” involves facing your demons or inner fears. Ancient cultures believed that through this struggle, you find your new, transformed self. This is a very hard phase for people in our modern society because we expect change to be like a “light switch” and are uncomfortable wandering in darkness and ambiguity. My retirement from General Mills was triggered by a lay-off. My severance period involved a phase of wandering in the woods, confronting my demons, and waiting patiently for my new beginning to come into focus. I emerged from the neutral zone into a productive and energizing new career chapter.

Only after endings and the time of fallow neutrality are finished, can we launch ourselves anew. 2020 finds us enjoying our new space and new routines that could not have happened if we hadn’t purged.

As you pursue your aspirations for the 2020, especially if your resolution is faltering, seek wisdom from Transitions. Maybe you need to create space (physical, mental, emotional) by retiring some old habits and routines? Or perhaps you need to wander in the woods and get comfortable with ambiguity before you can transition? Just have faith that after these struggles, a new beginning is on the other side.

“We must let go of the life we’ve planned so as to have the life that is waiting for us.”