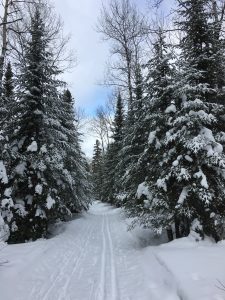 On a brilliant winter day when my youngest child was about three months old, I made plans to go cross-country skiing with my friend, Susan. After months of being tied down nursing and caring for an infant, this was a major outing and big adventure for me. Susan picked me up, and I bid goodbye to my husband, who had graciously agreed to care for our baby son and two young daughters for the afternoon. I was concerned that it might be too much for him, but he reassured me that he could handle it and told me to go have fun. I promised to be back in three hours.

Both Susan and I were somewhat new to Ithaca, New York. Neither of us knew where to ski in the area, but locals had recommended some trails about 20 minutes out of town. It was a cooperative trail system which volunteers were developing. There was no chalet and very minimal signage. I don’t recall how, but we obtained a photocopy of a trail map. We asked some people in the parking lot where to start. They pointed us to a trail that wound up a steep hill. We took off and had a glorious time.

Susan and I were really compatible skiers. Our skill level was similar, and we both sought challenge within the limits of safety. The fresh, cool air and vigorous exercise cleared my post-partum fog. When we crested the ridge and paused to catch our breath and take in the vista, I felt like I was reclaiming my body from the limitations of pregnancy and breastfeeding. Susan and I kept climbing and eventually the trail wound back downhill.

At this point, we were high on life. The smooth glide down was a just reward for our uphill trek. In our joyous oblivion, we sailed past the unmarked trail that would have returned us to the parking lot—and our car. In unbridled exhilaration, we sped down the hill thinking that we would land in the parking lot and call it a day.

To our shock and horror, when we got to the bottom, nothing looked familiar. We were in a wooded glen far from civilization. The winter sun was getting low in the sky. We looked at the map and realized that the parking lot was on the other side of the ridge. My watch told me that my three hours were almost up. I could feel my baby’s hunger in every fiber of my body. Susan later said that she noticed broken beer bottles, crushed cans, and party debris, which struck a note of terror. We looked at each other and without exchanging a word, took off in the most energetic uphill climb either of us had ever pursued.

Halfway up, my lungs were burning, but I kept going. I thought, “Thank goodness, Susan is a strong skier.” “I can’t stop and think. I just need to climb … as fast as I can.”

We found our missed trail and made our way back to our cars. When I arrived home well after my three-hour promise, everyone was doing just fine. My baby boy was not starving, but I was very relieved to feed him.

Susan and I rewarded our husbands with a “guys-only” rendezvous for margaritas and nachos at a local bar. The nightmares that we imagined from our wrong turn down the mountain faded into distant memories. But when Susan and I reminisce about this story, the scary and vivid details still surface.

Sometimes innovation projects seem like they are cruising to a smooth landing, only to encounter an unexpected challenge. Teams have to rewind and retrench territory already covered. They may need to go back to the project’s charter and start over. When this happens, everyone feels as anxious as Susan and I did in that wooded glen with the sun setting. Talented leaders know how to navigate their teams out of the woods. Even when everyone is in doubt, they find a way to rally their team to go the extra mile … climb another ridge … and deliver on the goal.

Don’t Have All the Data

When Susan and I took off into the woods, we didn’t have a very detailed map or trail signage to guide us. In the same way, many innovation teams forge their way into uncharted territories to discover unmet consumer needs and technological discoveries. When traveling into risky and uncertain places, you probably won’t have data and analytics to back you up.  In fact, innovation often involves exploring hunches and possibilities. Don’t let the lack of data stop you from the adventure of exploring new territory. Often, data comes during discovery.

Power Out of Trouble

Susan and I got out of a potential disaster by acting quickly, not second-guessing each other, and putting all of our energy into high gear. If a project goes off the rails, how might you help your team rally around a path forward? When a project takes a sideways turn, team members might need to go above and beyond. Sometimes they second guess each other. People may want to defect. Strong leaders motivate their teams to stay together and switch into high gear.

When timeline commitments cannot be met, trusted relationships are at risk. Susan and I felt terrible that our wrong turn caused us to break our commitments to be home when we said we would. Apologies and margaritas healed our broken trusts. If only it were always that simple. The ripple effect of timeline disruptions can wreak havoc across the supply chain and affect many people’s lives. Strong leaders pay attention to the human impact of these unexpected disruptions and compensate their teams for climbing uphill when they were supposed to be coasting downhill.

A person who never made a mistake never tried anything new.