Kayaking against Headwinds on the Mighty Mississippi 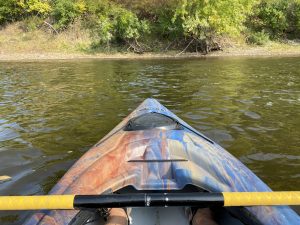 Coming out of COVID lockdown last spring, we bought two kayaks as a new way to experience the many lakes and waters of Minnesota. All summer, family members took turns using the kayaks. Our favorite outings involved exploring local stretches of the Mississippi River north of Minneapolis. 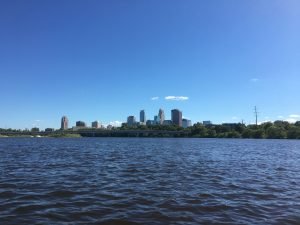 Capturing a final hint of summer in Minnesota, the whole family set out on a kayaking adventure a few weeks ago. We rented three kayaks so all of us could go together and chose a 3-hour package, which included drop-off upstream and pick-up at a downtown park. (No upstream paddling required.) My son and I had paddled this route a week earlier; it was a chill 2.25-hour cruise. The route flows through nature preserves, sand bars, and wooded residential areas. It ends with a dramatic view of the cityscape.

We launched our kayaks at River Park in Brooklyn Park, excited for an adventure as a whole family. A beautiful, sunny mid-September day, the trees were starting to change color. But when we got to the boat ramp, a strong wind foreshadowed that a rough ride was ahead. 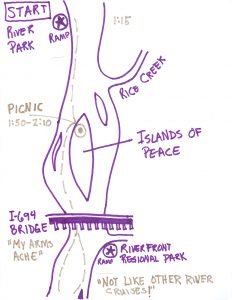 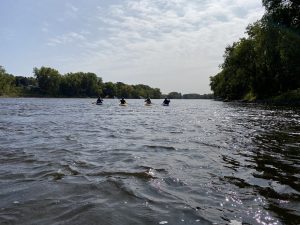 John, who rented the kayaks to us, advised that we hug the west shore to avoid the white caps. The first 30 minutes weren’t too bad. The wind was brisk, but the shoreline offered some protection as we paddled along a beautiful residential stretch. 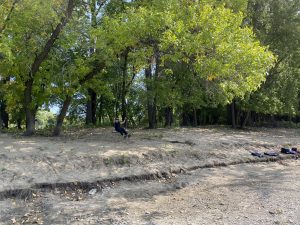 We approached a large sandbar, Islands of Peace, and decided to stop for lunch. Tucked out of the wind, sandy beach offered a delightful resting place. After lunch, we skipped stones on the river and took turns swinging from a tree branch.

With the island trees protecting us from the wind, we almost forgot about it–until we hit open water heading toward the I-694 bridge. Choppy waves slapped the sides of our kayaks. Fierce headwinds made paddling hard. With a sinking feeling, I realized that this route was not going to be the chill experience it was a week earlier. 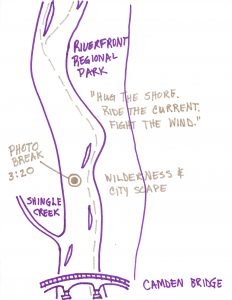 After thirty minutes of steady paddling, we got to the Riverfront Regional Park, where my daughter and had launched before. She said, “My arms ache.” We looked at each with understanding … and the knowledge that we still had at least another 1.5 hours to go.

The next stretch was brutal. The wind howled straight up the river … neither shoreline offered protection. 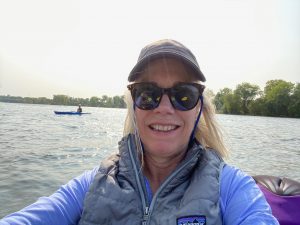 If you paused to rest, the wind pushed you upstream and spun the kayak sideways. No choice, but to aggressively paddle. My forearms throbbed. My skin prickled from windburn and sunburn (I forgot to apply sunscreen). However, the cliffs and sandy beaches along Riverfront Regional Park provided  a scenic backdrop to our struggles.

We shifted to the east side and found a sweet spot along the shore where the current was swifter. It wasn’t like floating downstream, but the current helped a bit.

About an hour and half after our lunch break, we paused to rest and take some pictures. The sun danced on the waves. The warm sun, crisp air, and occasional spray of water tickled my skin. After a brief break, we forged ahead … paddling hard against the wind.

Cityscape and the Final Stretch 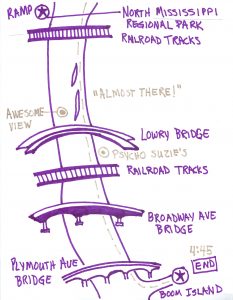 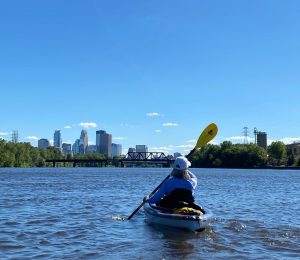 Twenty minutes later, we spotted the boat ramp at North Mississippi Regional Park, where we had launched before. Several of us thought of bailing out. But John and our second car were three miles downstream. How would we get ourselves and the kayaks to the meet-up spot?

The cityscape loomed in the distance … a beacon signaling our destination.

The last stretch was an exercise in endurance, one paddle stroke at a time. Someone mused, “Too bad we can’t stop for a beer at Psycho Suzie’s.” Our kayaks were overdue … and  there were COVID risks to consider. 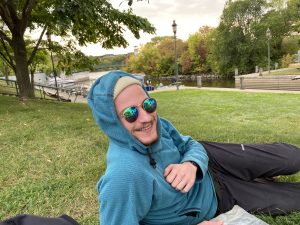 Finally, we arrived at Boom Island. Four hours after we embarked.

John was there waiting to help us unload. He said, “Don’t worry about being late. Everyone says it was brutal out there today.”

It felt so good to flop on the grass on Boom Island, sheltered from the wind. The tree foliage hinted at the coming fall as final rays of summer warmed the air.

Visual Timeline to Reconstruct at Story

Throughout this summer and fall, I’ve been wanting to write a story about kayaking on the Mississippi. But all of our various voyages were pleasant and relaxing experiences. Without any tension in the journeys, there was no story to tell. The brisk headwind during this excursion introduced an element of tension that showed potential for a story plot. But I still needed to draw out more details than simply saying, “it was windy that day.”

I drew a proportional map of our route along the Mississippi River to plot out this story (inspired by the map included in the rental package). It helped me to reconstruct the details of our windy kayaking journey. Notations about key landmarks, events, and times–plus the emotions we experienced–depicted what, when, where, and how the journey unfolded. With these details mapped out, it was easier recount the story of the trip.

In his book, Circe of the Nine Muses, David Hutchens describes a similar technique, called a “visual timeline,” to develop stories. I used a variation of this approach. Sub-stories may tumble out, so Hutchens also employs it as a story-mining exercise. Hutchens outlines the key steps to develop a visual timeline:

For example, think of a time when you worked on a team who created a winning idea. Draw a timeline about a narrow brush with disaster. Or depict a vacation that went sideways.

With a blank sheet of paper positioned horizontally, draw line about a third of the way up the page. Reflect the ups and downs of the scenario by drawing above and below the baseline. Leave some space below the line to come back later to extract insights and take-aways.

Fill in the Story Details

Add text, titles, simple icons, and stick figures to illustrate people, places, and events. My Mississippi River maps depict landmarks and the timing of stops and pauses we took along the way. I also noted our comments and observations about how we were feeling and experiencing the journey.

Draw Out the Meaning

After completing a timeline, step back and reflect on what the story means. Use the space below the timeline to jot down all your insights. Circle or highlight the big ah-ha’s. In this kayaking story, I saw that the central tension emerges from the juxtaposition of challenging kayaking conditions with spectacular scenery.

Like other visual storytelling tools, like storyboarding and picture books, the visual timeline helps you reconstruct memories of the past and connect meaningful elements of a story. This tool helped me organize complicated  elements of the kayaking story, like how long it took us to cover different legs of the journey. It also provided anchoring points to place photos along the route to capture the scenes. Encyclopedias and museums present historical and geographical material through timelines, maps, photos, and narrative text to tell stories about what happened.