Deciding “Who Gets the Gifts?” 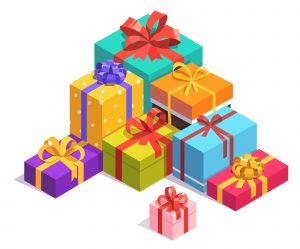 My work group gathered in a cozy room for a team-building retreat. The conference room was tucked away from the hubbub of the main workspaces and high-traffic corridors, adjacent to a comfortable lounge area. We’d worked together for a while and knew each other well. Also, we enjoyed our work and got along. Our plan was to spend the morning learning about the Myers-Brigss Type Indicator (MBTI) and the afternoon on team building. The team was relaxed and in a good mood.

Mid-morning, we returned to the conference room after a break to see an assortment of gifts piled in the middle of the table. Jon, our facilitator, divided us into two break-out groups based on our decision-making preferences. Those who use Thinking (logic, analysis) processes were sent to the lounge. And the group who with a Feeling (values, human impacts) preference stayed in the conference room. Jon gave each group the number of gifts corresponding to the number of people in each group—but minus one! He gave us twenty minutes to decide who should get the gifts.

I followed the Thinking group to the lounge where we set down our pile of gifts on an ottoman.  Someone queried, “Maybe some of the packages have multiple items that could be divided? Or perhaps the items have different value? So, maybe we should open them up before we decide?” Everyone agreed. We opened the gifts to find an array of trinkets, like a pack of markers and erasers, candy, a key ring, and corporate tchotchkes. We sorted them into different piles (there were several multiples that could be divided) and asked each other if there was something anybody wanted. Within five minutes, we had all the gifts divided and spent the next 15 minutes laughing and telling stories.

When twenty minutes passed, we rejoined our teammates in the conference room. Our laughter quickly died when we observed a very tense dynamic occurring. One participant was sitting alone across the room with her arms crossed, periodically eyeing her teammates with suspicion. The others were engaged in an animated—almost agitated—conversation. All the gifts were still wrapped. They could not agree on how to divide them.

As we debriefed with Jon, the Feeling group revealed that they goto stuck agonizing about the (most) fair way to divide the gifts. This question was deeply emotional for them and became a serious point of debate. They were amazed that we solved it so quickly without conflict.

While I heard them articulate their considerations, I realized that none of these factors had even crossed our minds. But maybe they should have? Clearly, the stakes were low with how to divide a pile of trinkets. But what if we had been making a more consequential decision in which empathy and human factors should be worked into the equation?

When teams face pressure to reach consensus, they often experience internal conflict through their differences in decision-making styles. In this episode, one team with the same decision-making preference were the ones who struggled. While another team with homogeneous decision styles experienced no conflict. This exercise forced a choice on a simple matter. But if it was a different issue, Thinkers might bulldoze a solution without consideration of human factors. After this exercise, the Feeling Group acknowledged that they could have benefited from having some Thinkers on their team. Everyone understood the differences and how each contribute to collaborative decision making.

MBTI provides valuable insights into how people contribute to innovation and collaborative work. Within teams, people with a range of styles bring complementary energies that strengthen the capabilities of the team as a whole. The first step in harnessing the power of differences is to build awareness of individual and team strengths and challenges. In addition to MBTI, other instruments can be employed to surface key insights and provide processes to guide deliberations. In Once Upon an Innovation, we explore how various instruments can enable collaboration within innovation teams. I offer a few excerpts below.

The MBTI is based on Carl Jung’s theory of psychological type (i.e., normal difference in people’s behavior result from inborn tendencies to use their minds differently). These innate preferences are depicted through four continua that yield sixteen types or preferences:

MBTI is the most widely known instrument for understanding personality differences. Teams engaged in innovation, problem solving, leadership, or team building can leverage the MBTI in numerous ways to improve their effectiveness. Based on a well-researched and sophisticated framework, MBTI requires a significant time commitment to train a team to understand and apply the insights (minimum three-hour session). Plus, you need a certified MBTI Facilitator to conduct the assessments. Since it’s been in use for decades, many people have been exposed to it and are well-versed. If that’s the case with your team, you could shrink the training and spend more time on applications. Another caution: due to its popularity, some people have become weary of “yet another” MBTI session.

As quicker alternative to MBTI that provides a handy framework for innovation teams, I like the DiSC Team Dimensions Profile. Based on two decades of research on how people collaborate, Allen Fahden and Srininvasan Namakkal theorized that people’s natural thinking and behavioral preferences influence the roles they play on a team. The model is constructed on a two-dimensional matrix that characterizes how people approach their work: conceptual, spontaneous, normative, and methodical. An individual’s score on these continua indicates the roles they prefer to play on a team: 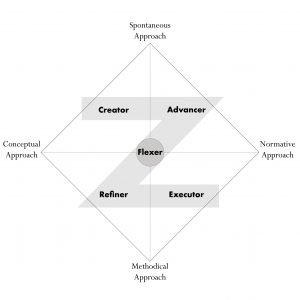 Many people play more than one role, and some people move fluidly across all roles. They’re called the Flexers.

The profile also recognizes that some people have combinations of preferences. All told, there are fifteen possible profiles, with some preferring one style and others landing in a two- or three-way preference. One profile, the Integrator, reflects an even balance among all four thinking styles. Every style, including the Integrator, has its Herculean strengths and its Achilles’ heel, but collaborating with people who have other styles can shore up these pitfalls. That said, when those with diverse skills, perspectives, and blind spots work together, their differences can produce conflict. Managing team dynamics to optimize everyone’s strengths is a key part of creative collaboration.

All of these tools promote awareness of how different styles contribute to a team, and how to leverage these diverse talents to strengthen team effectiveness. The instruments also offer useful frameworks to guide collaboration and decision making. Half of innovation is coming up with a promising idea; the other half is getting others on board with it. That starts with the innovation team itself and valuing their diverse contributions.

When everybody is thinking alike, somebody isn’t thinking.”