JFK’s Assassination: Where Were You?

I Was Laying on the Living Room Couch

On a gloomy day, November 22, 1963, in La Crosse, WI, I was home from school sick. My mom had to pick me up from school. Even though kids were not allowed to lounge on the living room furniture, she settled me on the couch and returned to her chores.

A while later, my mom came into the living room with a rag in her hand and sat down heavily on a chair—I vividly remember which chair. She put her head in her hands and said, “Something terrible just happened. The president was shot.” I thought she said “shocked.” My seven-ear-old self equated this with grabbing an electric fence, something that I’d experienced on my grandparents’ farm. As my mom continued to shake her head into her hands, I had a sinking feeling that it was much worse than a jolt from an electric fence.

Later, watching the TV coverage of the state funeral with my family, I focused on Caroline. We were the same age. Her little brother, John Junior, was the same age as my brother, Johnny (who was also a John Junior). Both of our dads went by their nicknames, “Jack.” When I watched her on TV attending her father’s funeral, my heart poured out to Caroline. Dressed in her red shoes, white ankle socks, and blue coat, I felt despair for—but also fascination with—this little girl. Although I saw her as a little like me, she played a role in a national spectacle.

I’ll always remember about how the events surrounding JFK’s assignation began while I laid on the “Living Room” couch. And they became real to me through my empathy for Caroline.

My Daughter Asked Her Grandparents

[I’ve been going through my kid’s old school papers and found this intriguing report of my parent’s and in-law’s viewpoints of JFK’s assassination. She interviewed all four of her grandparents as part of an oral history project in elementary school.]

“The JFK assassination shocked the country. Grandpa Jack’s reaction was that he was very sad. He was a teacher and students were crying. Jon [my dad’s dad] was also a teacher. Someone came into the faculty lounge during lunch and told them he had been shote but not killed. Then in his next class, the principal announced over the intercom that he had died. Grandpa Jon was especially sad because Kennedy was the first president he had been able to vote for. Grandma Buzzy was ironing and heard it on the radio. She thought that she hadn’t heard correctly and listened again. It was true. He had been shot and killed. After that, she went to pick up Jon and he already knew. She was very sad and felt like it was the end of the world.

How Do We Process Defining Moments in History?

Upending events like Pearl Harbor, JFK’s assignation, and 911 leave an imprint on our collective conscience. But they also imprint people in individual ways as reflected in how my perspective as a seven-year-old girl in the United States was juxtaposed against the adults in my life. For me—at the time—it was a story about a little girl’s and her brother’s tragedy. For my parents and in-laws, it signaled a much bigger sea change in national and world events. 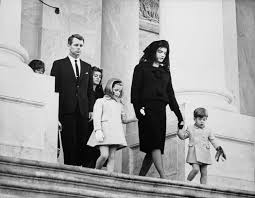 This provokes me to ponder how the next generation will look back on the COVID pandemic and the January 6 attack on the US Capitol?

Posted in Leadership & Influence, Something to Ponder